There were two stair-climbing trials in the study: (1) Portable Quad-Step, and (2) standard steps with no assistive device. Participants were instructed to use the handrail for each trial. The order of the trials was randomized. The standard stairs provided the baseline data for comparison and was used to normalize the EMG data.

Each participant was instructed in the proper use of the devices and was allowed stair-climbing practice to become familiar with the equipment prior to the trials. The Portable Quad-Step requires a step-to gait pattern (i.e., one foot is placed on a step and the other foot is brought up and placed on that same step). Each participant was allowed to ascend and descend the stairs at their own chosen pace to accommodate for varying levels of functional mobility. Following each trial, the participant was allowed a seated rest break. For safety purposes, each participant donned a gait belt and one researcher stood behind during ascent and in front during descent.

The EMG activity in all four muscles was significantly less during stair climbing with the use of the Portable Quad-Step as compared to standard stair climbing. During stair descent, there was significantly less EMG activity in all four muscles with the Portable Quad-Step compared to the standard stairs.

Findings of this study showed significant reductions in EMG activity in all four muscles during stair ascent and descent the Portable Quad-Step as compared to standard stairs. These results are similar to another study that examined EMG activity during lateral step-ups of 4 and 8 in. (Brasket al., 1984). The muscle activity in the rectus femoris and biceps femoris in that study was found to be less with the 4-in step during both stair ascent and descent. Increases in hip and knee muscle activity have been found to increase hip and knee flexionmoments and joint contact forces (Andriacchi et al., 1980). In that study, the knee extensor muscles showed the greatest activity during stair descent, thus generating the largest knee joint moments. Findings also showed more activity in the knee extensors during descent as compared to ascent. The higher level of muscle activity required during descent may help explain the higher incidence of falls that have been reported during stair descent (Verghese et al., 2008). That is, lower extremity muscle weakness may be more apparent during stair descent than ascent, and may help account for the increase in falls.

Hip ROM was found to be significantly less with the Portable Quad-Step during stair climbing, but not during descent. However, the knee joint showed significant reductions in knee ROM during both ascent and descent with the Portable Quad-Step device. Results of this study were similar to the results of other studies. Lark et al. (2004) also found that hip and knee flexion increased with increases in step height. Hip and knee ROM as well as joint moments increase with increases in stair inclination and step height (Riener, Rabuffetti, & Frigo, 2002).

On the basis of this study, one would expect that while it may take a person some time to get used to the riser height difference between standard stairs and the Portable Quad-Step, the use of the device should not pose a safety hazard for older persons.

The results of this study showed a reduction in muscle activity along with reduced hip and knee ROM when using the Portable Quad-Step assistive device compared to standard stairs. Because reduced muscle activity and reduced joint ROM produce less joint contact forces, the authors suggest that the use of the Portable Quad-Step may be beneficial for individuals with degenerative joint disorders, muscle weakness, or restricted ROM. It is possible that the use of this assistive device may also increase the functional level and independence for those individuals.

The University of North Dakota , Physical Therapy Department, conducted a comparative study of muscle activity and the range of motion (ROM) required to ascend and descend a normal stairway and the same stairway equipped with the EZ-Step Stair Climbing Cane..  The results showed a marked reduction in the amount of muscle activity required to both ascend and descend as well as marked reduction in the ROM required to use the EZ-Step equipped stairway. 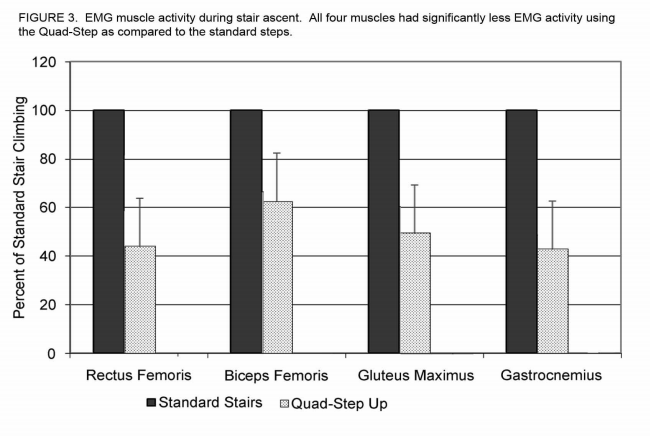 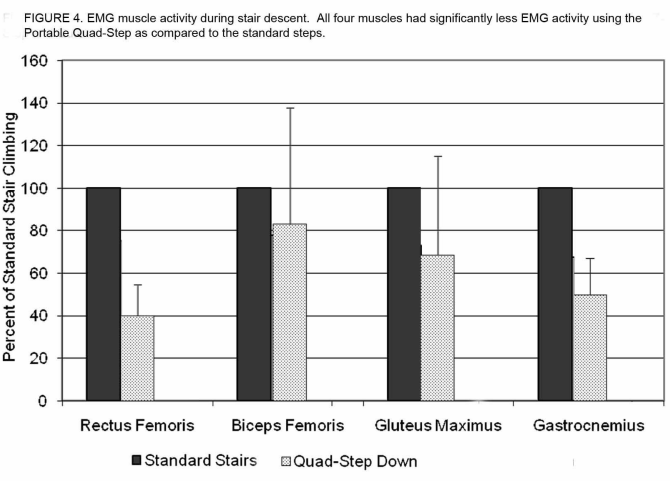 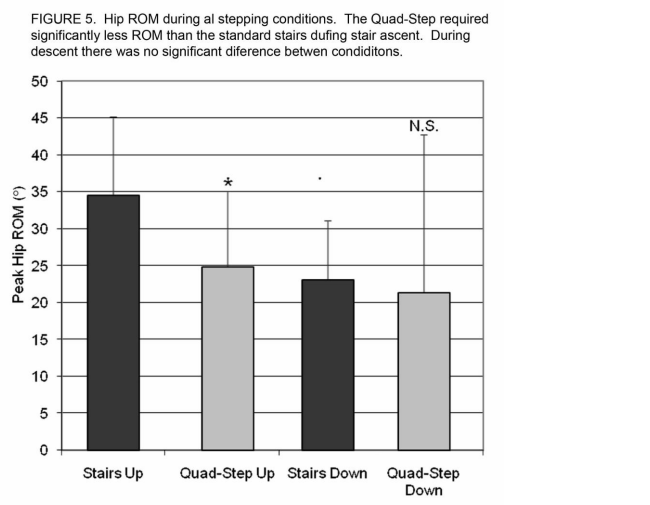 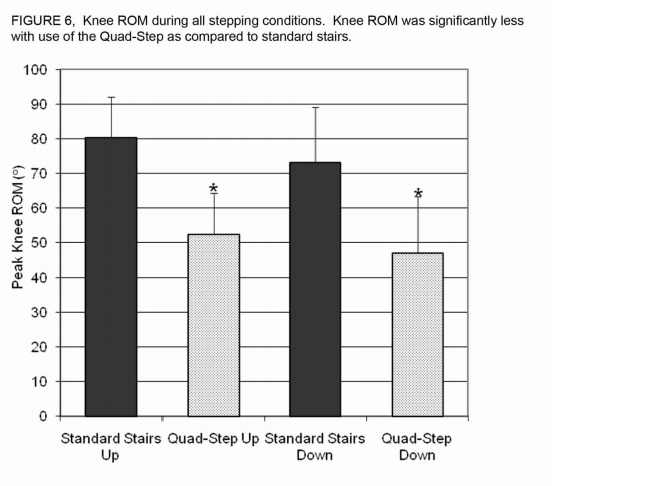 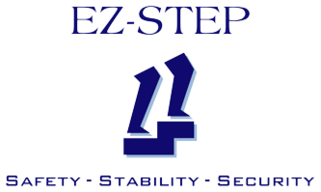